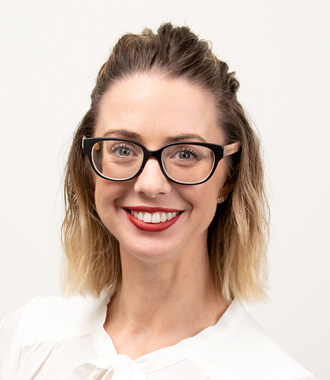 Shandell Wishart is a senior Orthoptist at Eyemedics, and has been working for the company since graduating with honours in 2007 from LaTrobe University in Melbourne.

Shandell’s role within Eyemedics is a varied one, not only does she do clinical work ups for the consultant, but she is also involved in training, rostering and management of clinical staff and orthoptic students from both LaTrobe and UTS universities. She also enjoys doing intraocular lens (IOL) calculations for cataract surgery, specifically the complex calculations for those who have had refractive laser, kerataconus or abnormally shaped eyes.

In 2015 Shandell began consulting as an independent Orthoptist one session per month out of the Greenhill Road offices at Eyemedics. Specialising in visual development namely paediatric vision, amblyopia and occlusion therapy. However, her main passion is assessing patients with eye movement disorders, those with double vision, symptoms of headache and eyestrain, pre-operative measurements for squint surgery and binocular vision restoration using exercises or prisms.

Professionally Shandell has been a state representative for the Orthoptic Association for the past 7 years and is a convenor for this year’s conference to be held concurrently during RANZCO in Adelaide in November 2018.